Joining a band is one of the main reasons why people want to learn to play an instrument.

It’s a healthy hobby and a fulfilling project.

Maybe you are a bass player already but never played in a band before.

You might be wondering when is the right time to do it, don’t you?

It is not a matter of time, it is about the quality of your playing. The more you practice, of course, the quicker you’ll join a band. However, it is possible for you to join a band being a beginner and learn along with your band team. It all depends on your goals.

It’s not compulsory for you to know everything.

You can join a group by simply mastering the basics.

Either way, I encourage you to keep reading to find out more information on this topic.

Is your main goal to join a band?

Setting up your goals is important.

It is not mandatory to join a group if that’s not what you are looking for.

Maybe you want to play bass just for the sake of it.

Maybe, you do want to play with other people, but not in a real band.

For example, you and some friends gather together just to jam and have fun.

Or maybe you get into a musical project that is not planning to play live or record an album.

There’s a great variety of objectives, and it is possible that your goals differ from the ones the band has.

Always know what you are aiming for. If not, at least find partners who are unsure as well.

Otherwise, it’s going to be a recipe for frustration.

Lastly, you may want to join a group but decide not to do it because you feel unprepared. I would say be careful with that.

Sometimes, you’ll never feel prepared. That doesn’t mean you shouldn’t do it.

If joining a band is your ultimate goal, do it despite the fear.

Can you play over a backing track and not get lost?

If you are planning to be the bassist, you must keep the rhythm.

After all, the bass’ function is to be a bridge between the melodic guitar and the betaing drums.

But even if you weren’t a bass player, following the right tempo is critically important anyway.

Once you begin playing, you’ll notice how easy it is to slow down or hurry up.

Being consistent requires practice, and getting used to playing over a backing track may take some time.

No doubt about it, it is a great idea to practice at home with a backing track before joining a band.

However, in this particular case, it might not be essential.

Why? Well, many people join a band without having played over a click track in their lives.

Truth is, it is possible to learn how to stick to the bpm without a metronome, just by rehearsing over and over again.

Don’t get me wrong, backing tracks are excellent tools, and I highly recommend them.

What I’m trying to say is, do not let such a detail hold you down from joining a band.

Playing has to do a lot with intuition and feeling, and many times, keeping the rhythm comes naturally.

If not, you can still practice at home with a metronome. There are plenty of apps and programs for that.

Just how experienced are your bandmates?

The level of experience of the rest of the band will influence you.

If you are barely an average player but your bandmates are all pros, you can be sure there’ll be either lots of improvement or failure.

In other words, you’ll have to keep the pace.

As I said, this can be a great opportunity because it will push you beyond your limits.

You might even improve more than you would if playing alone.

On the other hand, if you remain a beginner because you cannot progress at their speed level, then you’ll have to find a different group.

Now, what happens when the whole band is as inexperienced as you?

Good thing is, you can improve at the same time together, without rushing.

Do not stop practicing, and you’ll see the results sooner than you think.

Are you starting a band with your friends or do you want to play with strangers?

It’s not uncommon to start a band with friends.

Most of the time, it gradually grows from a weekend hobby to a serious project with a lot of future.

Forming a band with friends helps to gently lose the fear of playing in front of people.

After all, you feel comfortable around them. You are not proving anything to anyone.

There is no pressure, no judges.

On the other hand, playing with strangers is a different case.

They look for a specific level of professionalism, usually above average.

Sure, this is a general rule and could change depending on the band’s expectations.

However, even if the rest of the band is tolerant (or are novices as well), you are more prone to feeling anxious playing in front of them. After all, they are strangers to you.

This is a normal reaction, and shouldn’t take you more than a couple of rehearsals to get used to the new environment.

The choice is up to you.

Will you join a band of strangers, or create your own group with a handful of friends?

4 fundamental skills you need before joining a band

Learning to play an instrument is not enough.

There are other things you should consider before joining a band.

At the very least, they are food for thought.

You could panic by seeing so many frets for the first time!

Do I need to know the position of every note?!

For now, just learn the basics.

You should know where to locate a C, a D, or a G in the fretboard.

Learn at least one position for each note.

The rest will be discovered naturally.

2. Learn how to properly tune your bass

This one is more relevant still.

You need to know how to tune a bass properly, both in standard and in any tuning you‘ll be using with your band.

For example, it is not the same a Drop D tuning as a standard C tuning.

Knowing the ones you’ll need is enough. Understand which note should sound when playing a string in the air.

For this, you can download a tuner app, or even buy one at a music store.

We have already talked about this.

However, it can’t be stressed enough.

If you are a bass player, then keeping a steady rhythm is a must.

Do you think you can’t? Then practice!

The more you do it, the faster you’ll learn.

4. Have your own instrument

Joining a band without an instrument is like being a carpenter without a hammer.

A bass guitar is a tool. Without it, it’s impossible to work.

Sure, maybe a bandmate lets you play with his/her bass every time you rehearse.

But what will you do when you need to practice at home?

Learning on your own is part of the process too.

It doesn’t matter if your first bass is cheap and of poor quality.

It’s a bass guitar after all, and it serves its purpose.

How to approach a band you want to join

Let’s suppose you already have the gear and basic knowledge for joining a band.

You are more than prepared… but how do you do it?

Well, being part of your local music events is important.

Knowing other musicians beforehand can help you find a band that’s missing a bassist.

Maybe a friend of yours recommends you, or maybe you simply hear about a group that is looking for a bass player.

Even if you are timid, you have to ask for it.

You don’t have to do it face to face, either.

Find a member of a band on a social media platform and send them a private message stating that you want to be part of the group.

What is more, you can create a flyer and publish it on your feed or stories, specifying you are a musician willing to join a group.

Leave your phone number or any other way of contacting you, and wait for requests.

It is important to be sincere regarding your abilities.

Don’t lie. Don’t say you can play things you cannot.

People don’t like that, because it shows you are unprofessional and someone who lacks seriousness.

Plus, action speaks louder than words.

So, tell the truth. If you are a beginner, state it.

If you are a professional, state it too!

There are dozens of bands that don’t care about professionalism.

They just want a bassist who knows the basics so they can jam and have a good time. 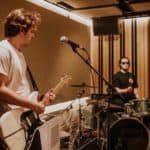 How Long Should You Play Guitar Before Joining a Band? 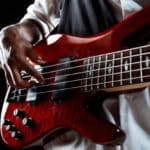 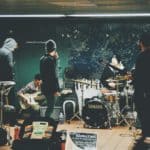 How Long and How Often Should Band Practice Be? 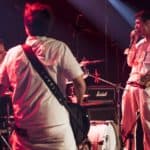