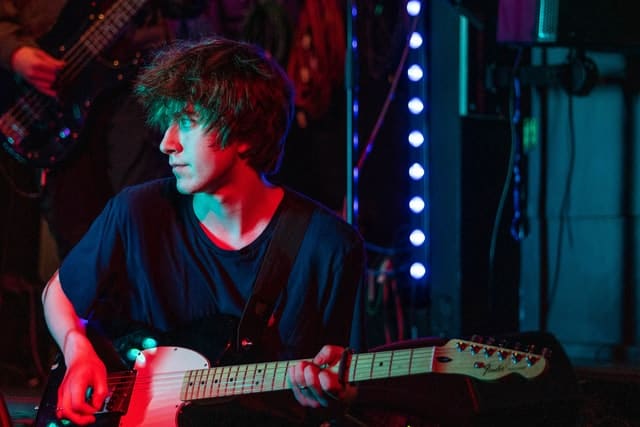 If you are here, you probably heard players discussing an amp or an effect and saying it “cuts through the mix” nicely.

Is it a kind of sound?

Is it a feature?

Why is cutting through the mix a good thing?

Is it always desirable?

Will anybody get hurt if you do it?

To answer all these questions, let’s just get down to the basics first.

What does cutting through the mix actually mean?

Cutting through the mix means getting a guitar sound that can be easily heard among all other instruments in a band setting. It doesn’t mean overpowering the other instruments with more volume, but finding a spot in the frequency spectrum where your sound can shine and not clash with any other.

In this article, I will go in-depth about there is to know about cutting through the mix, its meaning, when it’s desirable, and how to do so.

After leaving this page you will have a clearer idea of what to cut in a mix and a concrete list of tips for achieving a great tone that doesn’t get lost among the other instruments.

What is “cutting through the mix” for guitar?

Cutting through the mix refers to getting a guitar tone that can be easily heard among all of the other instruments sounding at a certain moment in a song.

Usually, it also means finding a spot in the frequency spectrum where your guitar’s sound doesn’t clash with any other thing, or where it overpowers whatever was there.

Of course, you wouldn’t want your guitar playing overshadowing your lead singer’s voice in the chorus, but there’s a place for everything. More on this later.

Can any guitar cut through the mix?

Yes, absolutely. Cutting through the mix is something you can do with any guitar. It’s not that much a matter of how a particular model sounds, but how to shape its tone.

Some guitars will have it easier than others, probably, but with the right amp, EQ, and effects you can certainly get there.

There are certain frequency ranges where guitars shine, and where they are expected to be heard during riffs, lead parts, or solos.

What makes a guitar sound cut through the mix?

First things first: Cutting through the mix isn’t necessarily a matter of volume.

Of course, you could set your amp to 11 and blow away the rest of the band, and make sure you will be heard, but that’s not the idea behind playing with a group, isn’t it?

To cut through the mix is more of a fine craft where you tweak your sound in a certain way that exploits a certain gap or hole that already exists in the mix.

For guitars, that’s usually the upper mid-range and some of the high-end.

Chimey sharp sounds naturally cut through the mix nicely. Think of the sound you would get when cranking a fuzz pedal.

On the contrary, the low end of the instrument is usually cut off or overpowered by the bass and drums. Focusing on it is not a great way of trying to cut through the mix.

When setting up your guitar tone for playing with a band, take into consideration that what sounds better for noodling around by yourself is not usually the best choice.

You see, when you are playing alone you would probably want a full sound. You want to hear your lows, have a clear midrange, and a bright top end.

When you have to share the sound spectrum with other instruments, a full sound on your guitar will probably clash and muddy up the overall sound.

Usually, guitar sounds that cut in a mix are focused and specific.

It’s always a good idea to record your band’s practice and take a listen from the outside with good headphones or studio monitors.

Is it really necessary to cut through the mix?

Cutting through the is necessary on some occasions, and on others is the worst thing you could do. Ever.

Say you are about halfway through your closing song and there is an epic solo where all the band is supporting you.

Probably that’s a great spot to cut through the mix and have a guitar sound that soars above them while not eclipsing any other instrument.

Imagine now, as I mentioned earlier, that your song builds up to an uplifting chorus where your singer is expected to give the performance of his life and you just come in and fight it with a sharp loud riff.

How many shows before he kicks you from the band?

Perhaps, with a more tamed sound, you could have played the same thing while not competing for the center stage.

Sometimes you don’t have to be the solo act, but just a complement to it.

When is it a good idea to get a tone that cuts through the mix?

The first example for the last section is the stereotypical moment to want to cut through the mix.

There are certain obvious spots on a song where your guitar playing should shine, and there’s nothing wrong with that.

What’s a bit harder for us guitar players is knowing when to shut up and just make room for other protagonists.

It may take some time, but a great exercise is to just listen to great records. You will rarely find a guitar sound buried under the rest of the band when it was supposed to be right in front.

Tips for dialing a guitar tone that cuts through the mix

For getting a tone that just slices clean through the mix I’d start by setting up a high pass filter around 120hz or higher.

This will bluntly cut any low end from your sound.

Getting a bit of overdrive, fuzz or distortion won’t also hurt you, but it’s not completely necessary by any means to cut.

After this, you should EQ with your ears, and if you can do so with a backing track or with the rest of your band playing, that’d be amazing.

Sometimes it would be a matter of rolling down some mids, to make the high-end shine brighter, while on other occasions perhaps more mids is what you need.

There is no rule of thumb that works for all scenarios, but perhaps a bandmate lending you an ear will be of great help for fine-tuning the small details. 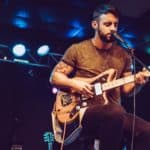 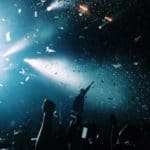 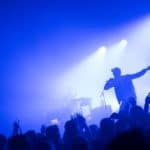 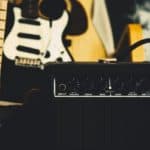 Guitar Amps: What Does It Mean to Scoop Mids?