It seems like you’re looking for a semi-hollow guitar to take home with you.

Epiphone is one of the kings of the mid-range for these kinds of instruments, so whatever your final decision is, it will be an amazing choice.

The Sheraton, Dot, Wildkat, Riviera and Casino models are some of the most popular models this brand has to offer and, even if they are not radically different, there is some variation among them that could affect your choice.

If you want a short answer about what are the main differences between the Epiphone Sheraton, Dot, Wildkat, Riviera, and the Casino, here it is:

The main differences between the Dot, Sheraton, Riviera, Wildkat, and Casino are that the Dot is a cheaper version of the Gibson ES 335. The Sheraton is a deluxe version of the Dot. The Riviera has mini-humbuckers. The Wildkat is smaller, less resonant, and has P90s. The Casino is fully hollow and has P90s.

If you can stick with us for a bit longer: We will talk about the main features of these 5 models, then we will put them side by side and talk about their main differences. Finally, we will give you our insights into whether of these 5 you should choose.

The Epiphone Dot was introduced in 1997 as a more affordable alternative to the Gibson ES-335.

As its bigger brother, the name “Dot” refers to the fretboard markers.

It has a center solid block of mahogany in which its main hardware components are mounted. This is to make it less prone to feedback, and this also is what makes it a semi-hollow guitar.

These kinds of instruments try to combine the best of both worlds: The resonance of a chambered body, with the resonance resistance of a solid body.

Whether if that’s accomplished it’s up to you. However, the Dot is a staple for both the Gibson and Epiphone brands, and it has a quite unique character that many tend to gravitate towards.

As for its full specs, here they are:

The Wildkat is a modern approach to the semi-hollow guitar construction.

Its main difference construction-wise is that the traditional method for semi-hollows is having a center block of wood with a hollow body around it. However, the Wildkat is made by hollowing out a solid piece of mahogany, leaving a center block in the middle.

You can also think of this construction method as a heavily chambered solid body.

This different construction paradigm would surely affect the way its body resonates, but not as much as its smaller size when compared to the other models in this article.

Wildkat’s smaller body is comparable in size directly to the one of a Gibson Les Paul, or a Gibson ES 339, or a Gretsch G2655

The Riviera is a classic Epiphone model from the 1960s.

It is pretty much another iteration of the ES 335 by Epiphone, in its current form with mini-humbucker pickups.

This kind of pickups has a tone more similar to traditional Fender style single coils than humbuckers.

They make for a more mid-scooped output, which will surely work great for rhythm players.

The Sheraton is Epiphone’s version of a 335-style guitar.

Rather than being just an affordable alternative, which it actually is, to Gibson’s lineup as the Dot, the Sheraton gives this model its own spin.

Although subtle, the differences are present, and they are not only functional but also aesthetic.

The Sheraton takes the semi-hollow mid-range segment to a whole other level with its construction and finishes.

The result is an amazing instrument, that surely captivates many blues, jazz, and rock players.

Its main specs are the following:

The Casino is a different kind of monster. In this case, there’s no center block, making it a real hollow-body guitar.

This for sure gives the player the real experience of having a resonance chamber in the body of the instrument. However, as you might expect, the tradeoff is a bigger chance of getting into a feedback loop.

Of course, the player who picks up a Casino should be well aware of this, and of the tonal subtleties of the dog ear P90 pickups that it comes with.

This kind of pickups gives it a different character, very present in mids that surely works beautifully with cleaner or slightly saturated tones.

As for the Casino’s main specs:

Main differences between the Epiphone Sheraton, Dot, and the Casino

The differences between these 5 guitars are not game-changers, but they indeed exist.

To begin with, the Dot and the Sheraton are the most similar pair of these 5. The Dot is the cheapest one, and its objective is clearly being an affordable alternative for the Gibson ES 335.

The Sheraton is a “deluxe” version of the Dot, with some upgrades, hence the price difference. The most apparent are the aesthetic ones, from the finishes to the block inlays. “Under the hood” there are subtle differences such as the tonewoods chosen.

Maple is the material of choice for the center block of the Sheraton, which matches Gibson’s choice for its ES 335. The Epiphone Dot has a Mahogany center block, as you could see below.

There are also differences in fingerboard material, neck materials and construction, and pickups.

All these specs will surely result in a noticeable tonal difference even between the most similar instruments of this comparison.

The Riviera enters the picture mainly by having a different pickup configuration. Mini humbuckers, as said above are more reminiscent of single-coils, with a more scooped sound, with less output and more treble presence.

This model also is the only one of this lineup to have a different, C-shaped, neck profile and a Frequensator tailpiece that surely defines its looks.

The Wildkat comes with a smaller body size and a heavy chambered solid-body construction that plays the same role as a semi-hollow. However, this smaller chamber of resonance will surely make it sound very different from the rest of this lineup.

It is surely a more modern approach to semi-hollows, with overdriven tones in mind. Its P90 pickups make for a very unique riff machine with its lower output than a humbucker, but very mid present tone.

As for the Casino, the situation is completely different. This is a hollow body guitar, with no center block. The resonance of its chamber will be more noticeable in this case.

The Casino also rocks a pair of dog ear P90 pickups which will surely give it a more mid-present, more single-coil-like sound.

Surely Epiphone’s focus for the Casino was delivering a more vintage sounding (and looking) instrument, and that can be confirmed by its trapeze tailpiece.

Here in GearAficionado we don’t like pointing you in one direction blindly. We are all about giving you the information you need to make a better choice for yourself.

We encourage you to try the gear personally, if it’s possible to you, and to not rely on YouTube videos or blog posts such as this.

Buying a guitar is a very personal experience and you should always hear and feel the instrument before pulling the trigger.

However, if you would like to hear what we think might work out for certain groups of people, here are our insights into which one of these 5 guitars you would like: 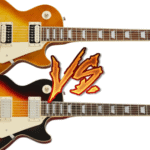 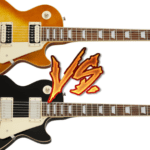 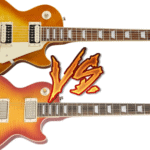 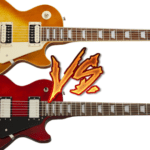