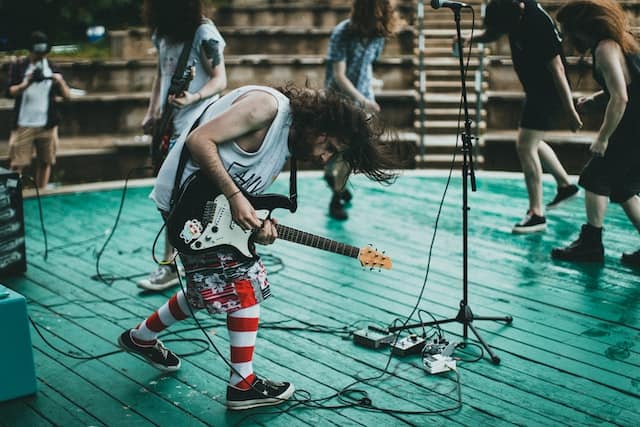 You’re playing guitar, learning your favorite songs to impress the girl you like. Cool, most musicians get into music because of that, did you know it?

Anyway, your mother enters your room and takes the instrument away from you.

“Go out and do some exercise!” she yells at you.

“Mum, but I want to impress the girl in my classroom!” You reply.

“If you want to impress her, you’ll need to do some exercise, my son…”

First of all, that personality wins over physical appearance.

Playing guitar burns calories. The amount of calories one burns while playing depends mainly on the position the guitarist plays. For example, playing standing burns more calories than playing while sitting on a chair. Not to mention, playing live performances burns the most calories.

Before taking your electric guitar and darting into the gym with the excuse of “getting into shape”, you’ll need to consider other factors.

Below we’re discussing them all in a detailed and well-explained way.

How many calories can you burn practicing guitar at home?

As a general rule, you can expect to burn 80 calories an hour when playing at home.

However, this number changes depending on the way you play.

In other words, it’s not the same to play on your feet as to play sitting down or laying on your bed.

So, you’ll burn 80 calories in an hour only if you’re playing while sitting on a chair or sofa.

On the other hand, this number drastically escalates when you stand up. If you play guitar standing up, the number doubles to 159 or 160 calories per hour.

This is a great reason to push you to practice guitar on your feet. After all, we totally understand that practicing while sitting on a sofa is comfortable and helps you focus on the instrument.

This is a fact. But don’t forget the many benefits of playing guitar standing.

You’ll acquire a better posture, burn more calories (as we have already mentioned), and prepare yourself for future live performances.

Speaking of the Devil…

How many calories can you burn playing guitar in a live show?

One may logically conclude that playing in live performances burns 159 calories an hour. All in all, most live shows require you to play while standing unless you play an acoustic set or something like that.

However, this is not a true statement. In reality, playing guitar during live shows will burn calories the most.

The numbers rise to 239 calories per hour!

The reason behind it is very simple: the more effort you exert, the more calories you’ll burn.

One thing is to play standing at home. Another is to play up on a stage, in front of an audience.

First of all, the fact that you play in front of people fills you with adrenaline. It’s not always the case, but it’s probable that your heart will beat faster.

Such a faster beating of the heart, and more accelerated breathing, leads to burning calories.

Second, playing live demands moving, jumping, walking, and even running if you have a wireless set. Needless to say, such an exercise will yet again burn more calories.

Lastly, hitting the stage is not taking a cold shower. On the contrary, you will realize that playing in a scenario is a rather hot experience.

Naturally, the hotter you are, the more calories you burn.

So there you go. When playing guitar live, you’ll burn up to 239 calories in an hour.

Is playing guitar a reliable way for losing weight?

Playing guitar may lead you to lose some weight.

However, it’s not going to be as effective as other means.

Guitar alone is not a means for exercise, at least not as accurate as others.

How can you burn more calories when playing guitar?

As we have already covered, the most effective way of burning calories with a guitar is during live performances.

This may be achieved during jamming sessions with your friends inside a rehearsal room, not necessarily in front of an audience.

Just remember not to sit down and, if possible, move as much as you can. Jump and headbang; let yourself go crazy.

That way, you’ll burn a lot of calories for sure!

Are there any other instruments that make you burn more calories?

Now, you might want to burn calories but, despite your willingness to lose weight, you don’t want to play guitar.

This leads to two questions.

First of all, why are you even reading this article, to begin with?

Second, can you still burn calories with a different instrument? The answer to this one is yes, you can!

Needless to say, playing bass guitar burns the same amount of calories as playing electric guitar. It includes the variations regarding playing position and the amount of movement you implement.

So, the instrument that demands the most effort is the drums. If you’re a drummer, you can expect to burn the same amount of calories as a guitarist playing a live show (239 per hour).

In addition, some wind instruments may surpass or get pretty close to the number of calories you burn when playing guitar standing. For instance, the trombone burns 199, while the trumpet burns 119 per hour.

Other instruments like piano or violin will also burn 119 calories an hour.

Lastly, some instruments such as the horn, the flute, or the cello, burn up to 80 calories an hour (just like playing guitar sitting).

Now, time to go and lose some weight doing the thing we love the most: playing music. Good luck! 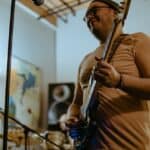 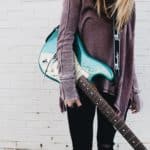 Should You Practice Guitar Standing Up? 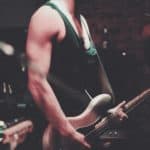 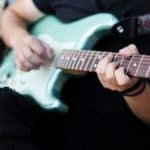 Should You Wear Your Guitar Strap While Sitting?