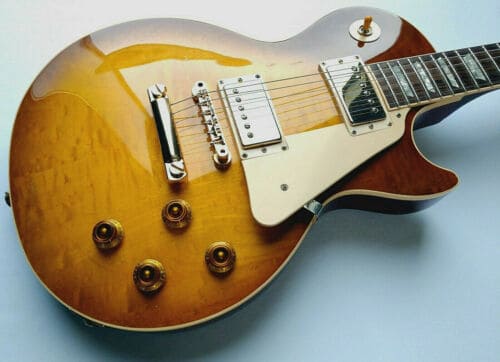 Although Les Pauls were traditionally made with mahogany, modern takes on the model are known to use many different materials.

In some cases, this can be with the intention of substituting the original tonewood for a cheaper one, while in others just a way of pushing the envelope and getting away from tradition.

But what is actually the best wood for a Les Paul?

Original Les Pauls were made of mahogany, maple, and rosewood. These materials were selected mainly because of their availability and quality in the late ’50s. Nowadays, it’s harder to find high-quality specimens of these woods, so manufacturers gravitate to alternative ones such as okoume.

In this article, I will tell you all you need to know about what makes a Les Paul sound like a Les Paul, and what alternatives might get you close to it.

After leaving this page you will have a clearer idea about how tonewoods work on a Les Paul, what is the traditional take on the instrument, and what things you should look for when shopping for a great guitar.

And, although this quality I mention can be used to rank specific types of wood, or species (or anyway it should be said) such as Mahogany, Maple, Cedar, Rosewood, etc. or their different local variants (Indian Rosewood, Brazilian rosewood) I also think about it within slabs of the same kind.

You see, you can find two pieces of comparable trees of mahogany, however one has been cut very recently and the other one was stored for 70 years.

Legendary Les Pauls were built with mahogany, maple, and rosewood

As you might know, the original Les Paul was made with mahogany for the body and neck, maple for its top, and rosewood for the fretboard.

Was this the result of thorough experimentation and research until Gibson and Les Paul himself found the perfect combination in terms of tone and playability?

Probably not, however, I do think they empirically knew what they were doing.

Original guitar models were mostly made with what was available at the moment, and not with what looked or sounded more exotic.

This selection (or given set) of materials put together in this guitar ended up shaping the sound of lots of legendary records and casting in our brains what great Les Pauls should sound like.

But is this all Les Pauls should be?

The case for Okoume

Okoume is a hardwood native to Africa that’s commonly used as an alternative to mahogany.

It has a slightly brighter tone, particularly in the upper midrange, but this probably will be hard to notice on an electric guitar.

Many purists will turn away from “modern” alternatives such as this, but when the choice is to be made between a very young piece of mahogany or a well-stationed slab of Okoume, I would always go for the more mature alternative.

Not only Okoume is nowadays used as a replacement for mahogany in many guitar models that don’t intend to be a truthful reissue of their classic counterparts.

It’s common to also find necks and bodies made of korina, koa, wenge, agathis, bubinga, walnut, and even basswood.

Pau ferro, baked maple, laurel, and even synthetics such as richlite can also be found as fingerboard tonewoods.

Is there anything wrong with this?

It’s just a slightly different flavor, and for electric guitars such as the Les Paul, one could argue it might be even more of an aesthetic choice.

Mahogany is an expensive tonewood, and its demand has only grown with the years and its popularity as a material for luxury furniture.

A completely different scenario from what Gibson had to deal with in the late ‘50s when the Les Paul was first prototyped.

There is no best wood for a Les Paul since it mostly depends on the quality of the current slabs available. When the original runs were made, mahogany, maple, and rosewood were a great alternative, however, nowadays their quality is lacking. This is why manufacturers use substitute materials. 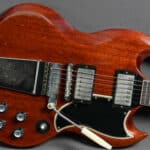 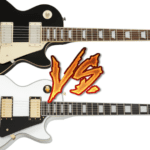 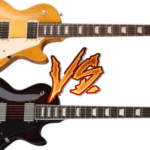 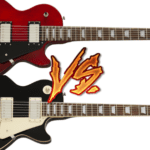