The bass guitar is one of the most exceptional instruments of them all.

It serves as a bridge between the rhythm of the drums and the harmonic freedom of a guitar. Long story short, we could say that it has the best of both worlds.

Whether you enjoy playing it or simply listening to a song with a remarkable bass line, this list is for you.

Next time someone says that bass cannot be heard, simply show them any of these songs.

An all-time classic from one of the biggest bands in punk rock music.

The soft-reggae-like guitar chords in this song help make the bass line stand out.

The first Black Sabbath album presents this track with a powerful bass intro created and played by Geezer Butler.

It’s a great bass intro for musicians trying to move between intermediate and professional playing levels. However, it’s worth pointing out that the bass line throughout the rest of the song is relatively easy to play.

John Entwistle is recognized as one of the best bass players in rock music. So, we might as well mention the entire The Who’s discography.

We select My Generation not only because it’s one of The Who’s ultimate classics, but also because of the bass solo coming after the second chorus.

Yet another band whose bassist is so exceptional that choosing just one song feels illegal.

Nonetheless, we strongly believe that Around the World is a worthy selection for the list.

The second Gorillaz album Demon Days is packed with hits.

In the case of this particular track, the main reason it turned into a classic is its catchy and memorable bass line.

Plus, it’s really easy to learn it, even for beginners!

The very first seconds of this song are an invitation to dance.

What can we say? Bass just fits like a glove with disco and funky music.

7. Sure Know Something – KISS

This iconic hard rock 70’s band decided to give a try to pop and disco in their album Dynasty.

Naturally, if they were aiming for disco-like hits, it was obvious that they would need a memorable bass line in their songs.

Needless to say, they achieved the results with this one successfully.

8. Another One Bites The Dust – Queen

Take it easy. We were not going to leave this one out at all!

If Queen was a hit-maker machine, it was just a matter of time before they released one with an unforgettable bass line.

40 decades after its release, Another One Bites The Dust is still on the top as the queen of bass lines in music.

It contained one of the most noteworthy and aggressive bass lines in any rock song: Hysteria.

Ever since its release, plenty of guitarists switched to bass just because of this song. Are you one of those?

Geddy Lee is considered one of the best bass players in history.

But don’t believe our words. Instead, believe your ears.

Listen to this Rush’s instrumental and confirm what we just said.

Radioactive might not have such an outstanding bass line in comparison to any other song on this list.

However, that doesn’t stop Imagine Dragons from gaining a position here. After all, the bass sound is solid throughout the entirety of the track.

Remember: More often than not, less is more.

Mike Dirnt is an exceptional bass player, and in this song, he highlights his playing abilities.

The fact that Billie Joe Armstrong doesn’t play guitar at all during the verses only makes the bass line more significant still.

Bassist Matt Freeman demonstrated that you can be punk and still create a complex bass line.

But for those who were still dubious, he also provided an insane bass solo in the middle of the song. You know, just in case.

At first sight, this song doesn’t seem to have great bass. That is until you realize Royal Blood doesn’t have a guitar player, and that every string arrangement is made with a bass!

Oh, and it has a cool solo too!

We’re starting to believe that every song titled Around The World is bound to have a fascinating bass line.

One way or another, this place in the list is not a surprise. C’mon, we’re talking about Daft Punk!

Metal lovers who start playing bass guitar do it because of this song.

Well, at least it’s one of the many reasons they pick bass.

17. For Whom The Bell Tolls – Metallica

While Metallica’s For Whom The Bell Tolls is not as radio-friendly as the rest of the songs in this list, it’s impossible to leave this track out. After all, it has one of the key bass lines in metal history.

But it’s not a surprise considering how good of a bass player Cliff Burton was.

Just when you think we run out of memorable bass lines in pop music Billie Eilish appears and shows us we were wrong.

A bit of a hidden gem in Lady Gaga’s song catalog.

Once you listen to this catchy and prominent bass line, you will wonder why this song is not at the level of tracks such as Alejandro, Poker Face, and Judas.

20. Come Together – The Beatles

The opener track to The Beatles’ Abbey Road.

Paul McCartney has hundreds of incredible and complex bass lines, but the one in Come Together is just too recognizable to leave behind on the list.

Prog-rock enthusiasts know this song because it’s a Yes classic.

The rest of the world knows this one because of the meme.

Either one or the other, you already know this bass.

It’s hard to argue that after listening to this track.

Every single note on this song makes you want to stand up and dance all night long.

But all in all, the main moving motor is the fabulous bass line; a perfect balance between complexity, octaves, and rhythm. 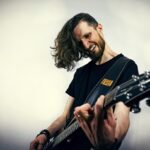 Guitar: 11 Drop D Songs That Sound Great [Tabs and Videos] Can You Play Punk on a Stratocaster? 8 Easy Nirvana Songs to Play on Guitar