The genre of R&B, which stands for Rhythm and Blues is kind of a hard category to really nail down.

But for some background, it used to refer mainly to Soul, Blues, and Funk music, which was mostly marketed to an African American audience.

And I think most people would agree that it sounds a whole lot better than the original term for the genre which was Race Music. I sure do!

But by the 1980s there were threads of pop, hip hop, disco, gospel, and electronica becoming intertwined in R&B music, a trend which continued in the 1990s and beyond.

And this was also during the period when purposely misspelling words and replacing words with numbers (such as 4/for and 2/to/too) was all the rage. I can’t say I miss that trend much, do you?

But of course, love songs, often called “slow jams” in R&B, are always popular so they were a good bet for a band or artist trying to break into the music charts.

So today let’s check out some love song earworms from the 1990s when FM radio was king and you couldn’t escape these songs even if you wanted to!

See how many you remember or can at least recognize if these came out before your time.

Toni Braxton hit it big with this song and although this list isn’t in any particular order this is my personal Number 1.

Ms. Braxton sings this one with a lot of feeling and it’s a pretty sad ballad to be honest.

And it’s interesting to note that although the song’s lyrics deal with pleading with a lover who left to return (“walked out the door” / “that sad word goodbye”), the music video is about missing a man who is killed in an automobile accident at the beginning of the video.

Hey, what are you gonna do? It’s still a great song.

2. I Will Always Love You

The version of this song recorded by Whitney Houston was a smashing success in the early 90s. And she really had an amazing voice!

It didn’t hurt that the song was featured in the movie The Bodyguard (1992), in which Ms. Houston also starred in.

In fact, it reportedly was her The Bodyguard co-star Kevin Costner who suggested that she should record a cover of the song. Good call Kevin.

Now it could definitely be said that the song’s lyrics are a bit elementary and over the top at times but it struck a chord with the public and is a mainstay in many publications’ Top/Greatest lists.

Seal hit it big time with this performance and the story goes that it was an old song that he had written but that he didn’t think too highly of for many years. Lucky he changed his mind, huh?

This song was even picked up to be included in several film soundtracks such as The NeverEnding Story III (1994) and Batman Forever (1995).

In fact, it was the song’s inclusion on the Batman Forever soundtrack that made the song huge since it wasn’t a chart topper when it was first released.

I’m starting to think Seal had either stored up a bunch of good karma or was just a really lucky guy.

I mean this song practically oozes with the instrumental foundation being so chill and Maxwell’s vocals layered with plenty of backup vocals.

And yet again its success is linked to a film soundtrack, this time the movie Life (1999).

5. Killing Me Softly with His Song

A version of the song recorded by Roberta Flack and released in 1973 went to number 1 and then it became a number-1 hit again 23 years later when The Fugees did a cover version of it.

And it sailed right across the Atlantic to climb the charts in many European countries as well.

Now this song obviously has a huge Hip Hop influence to it but the intro singing is definitely more R&B than anything.

“Umm… honey what are you listening to?”

While I wouldn’t go so far as to call this song crude or vulgar, I’m sure it took a few parents by surprise when they heard their children singing it or listening to it.

But compared to some of the hot and heavy R&B tracks like I Wanna Sex You Up by Color Me Badd that were being released back then, it almost sounds sensitive and romantic.

Anyway, this hugely popular song made Boyz II Men a household name in the 90s.

7. Always Be My Baby

This poppy hit was just another notch in the belt of megastar Ms. Carey.

Seriously, this girl must have a house that is made of solid gold by now. I have read that her recording of All I Want For Christmas Is You is a perpetual money maker every holiday season.

Always Be My Baby is mostly built around percussion, piano, and a lot of layered vocals with a mix of lyrics and the “not-quite-words” vocalizing that is so prevalent in R&B.

Wait… do these lyrics start to get a little creepy in a stalker kind of way (“You’re never gonna shake me”)?

Yes, they sure do, sort of like Every Breath You Take by The Police.

This song was actually a cover version of a Country song from a few years prior that was given the R&B treatment to great commercial success.

While the song starts out in an A Cappella style you can hear the ambient noises of city life in the background to give it some atmosphere.

And though the music does eventually join the vocals it remains pretty sparse and the singing is always the focus except for the short horn solo.

I’ve got to say this song might be a little too saccharine or “easy listening” for some people though, almost like listening to a church youth choir… best in small doses. 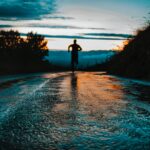 35 Great Songs About Running Away Can You Plug a Microphone Into a Guitar Amp?